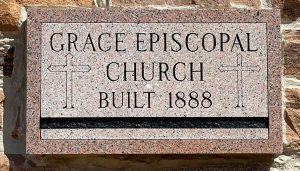 The stone building that is Grace Church was first constructed as a private academy in 1881.  The academy was never finished, and the property was conveyed to the Bishop of West Texas Missionary District and Grace Episcopal Church in 1885. Services were first held in the partially finished building in 1888, and on April 17, 1890 the Reverend H. A. Grantham held the first service of Holy Communion in the completed church.  Through gifts and fund-raisers by the congregation, the building was totally completed and declared free of debt in 1898.

In 1972, ground was broken on a new parish hall named Thayer Hall as a tribute to the Reverend Edwin A. Thayer, then vicar.  A covered walkway connects the two buildings, creating a courtyard complete with a natural stone pond and waterfall with a statue of St Francis as a focal point. Later a small columbarium has been added in the rock-walled courtyard.

In 1962, the building was designated a Texas Historical Landmark.  In 2003, the building underwent an extensive restoration to repair cracked mortar joints and much needed repairs inside.

In 2010, a new activities and office building was added, named the Chuchu Waltmon Smith Activities Center after our beloved, long serving member, Chuchu Smith.  It is complemented with attractive landscaping.  Renewed and with God’s grace, Grace Episcopal Church will stand on its solid Christ-centered foundation for untold future years. 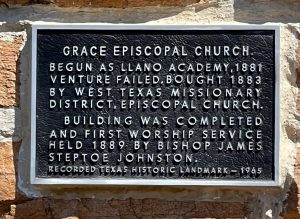 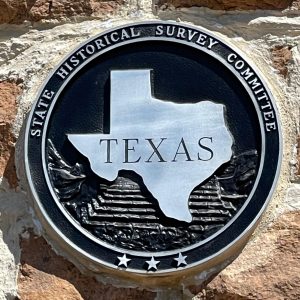 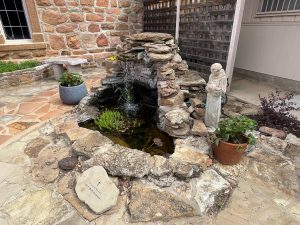